By HenkinSchultzFebruary 2, 2020In Other News
No Comments 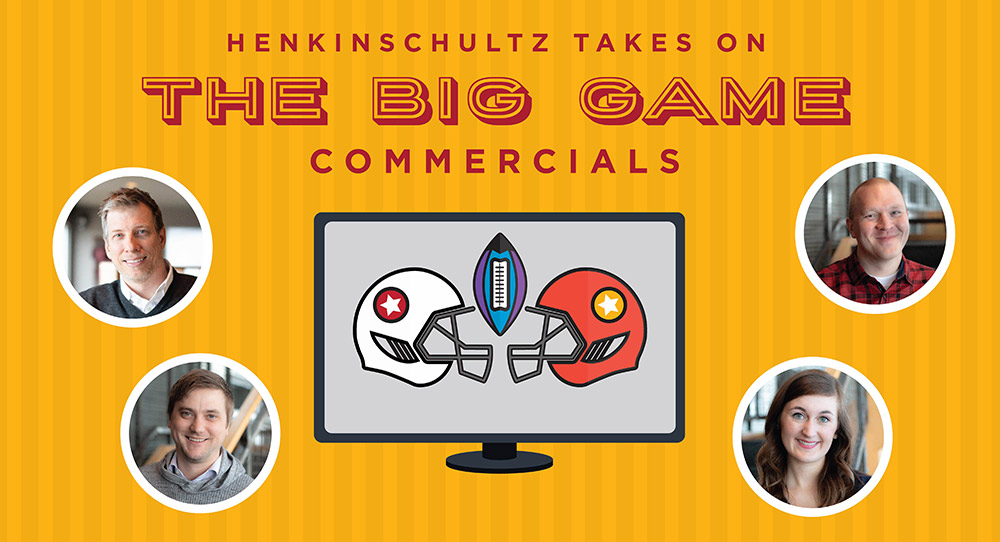 For the last couple of decades, the Big Game has almost become a national holiday. And whether you’re in the advertising business or not, the commercials are a popular highlight of the fun each year. Commercial development for the Big Game starts months in advance.

People tune in to see what Budweiser will do, what cute animal or baby will show up and what celebrity makes a cameo. It’s especially fun for an advertising agency like HenkinSchultz.

“The Big Game is really the only time of year when advertising is celebrated,” says Director of Client Services/Partner, Becka Burger. “Corporations invest heavily and whether the spots are entertaining, emotional or unpredictable, they have become an iconic part of the game.”

Many commercials can get panned by audiences because our expectations are so high. There’s no other time during the year where we deliberately sit down looking to watch a spot, as though we’re tuning into a movie. This year’s ads were particularly reflective of our culture and times, mixing humor with heart. And of course there are always a few “What did I just see there?” moments.

If you need a reminder of last year’s ads, USA Today’s ad meter does a great job of highlighting and ranking audience favorites. HS thought it would be fun to take our own internal poll. We selected a mix of graphic designers, digital, media and account staff to share their thoughts on this year’s spots.

The Hyundai “Smaht Pahk” really did a great job of doing what a commercial should do. Find the one thing you want to say. Make it watchable, of course. Then say it in a way that makes people remember it. On top of that, it really made me miss my Boston friends. 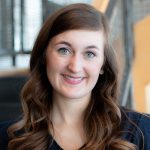 Little Caesars’ ad did such a great job playing off of the classic saying ‘the best thing since sliced bread’ by creating a company behind it. Bringing in Rainn Wilson, Dwight from The Office was a smart, strategic move because people also associate him with the popular TV show, so it makes them more willing to like the commercial just because he is in it.

My favorite part is at the end when Rainn is actually the one delivering the pizzas, because he too ends up believing in how great the pizza is. Overall, I think this was a great commercial to show that Little Caesars now does delivery without flat out saying “we do delivery”.

Overall, it was another year of big brands debuting new commercials during the Big Game from tugging at the heartstrings to being funny (or at least attempting to). Seemed like even more celebrities than normal were featured including John Cena, John Legend, Chrissy Teigen, MC Hammer, Post Malone, Lil Nas X, Rainn Wilson, John Krasinski and Maisie Williams.

My Top 5 Favorites were:

I thought the most entertaining spots were the Snickers and the Cheetos ads. The cheesy fingers trust fall fail was hilarious!

The cause marketing ads were strong too. In today’s climate, people gravitate towards causes that they can align with. Olay and Soda Stream did a great job of this and the conversations they created should have some staying power on social media.

My favorite spot, though, from a marketing perspective was New York Life. I thought they did a great job of not just describing their product, but telling a story in a way that associates their product with the raw emotion or sense of ease that it offers a person.

One of the most primal emotions is love and everyone, at least I hope, can relate to love in some way. Whether it’s love for your partner, your children, your parents, or any combination of the three, New York Life did a great job of associating their product with such a strong sense of compassion for those closest to you.

Commercials and advertising are a part of our lives. And whether you’re a Kansas City fan or a San Francisco fan, I think we can all agree. If we’re going to be sold, we better be entertained, too.

For this year’s Big Game, here are a few fun facts for you:

So maybe you’re not quite ready to spend The Big Game bucks just yet. However, if you are curious how our video production services can positively impact your marketing, talk to us between time outs or any time of year.