By HenkinSchultzSeptember 27, 2017Events
No Comments

The South Dakota State University Foundation and Alumni Association recently completed their Alumni Green project, creating the first space on campus specifically for alumni to gather and reminisce, with both indoor and outdoor spaces for SDSU visitors to enjoy. An event of this magnitude required a proper celebratory kickoff, and HS was happy to step up and dazzle the over 1200 alumni, students, administrators and faculty that were in attendance with an unforgettable visual show.

We were able to bring history to life, using a historic part of campus as an unorthodox projection canvas. The 165 foot tall Campanile – an iconic structure on the SDSU grounds – became a screen showing off a visual extravaganza created by the HS team.

Under the supervision of HS President and co-founder Kirby Schultz, and HS Audio/Video department manager Joey Schultz, four synched computers and three 350-pound high definition projectors were used to project a visual show that was synched with the South Dakota State University Choirs, under the direction of Dr. Laura Diddle. Kirby and Joey outdid themselves on this project, with Kirby traveling to Des Moines to test how well the projectors would work in this unusual capacity, and Joey figuring out how to make sure the images would properly translate on an extremely non-traditional screen.

“It was fun on this project to overcome the technical challenges, and it was especially gratifying seeing how well it went over with the crowd,” said HS Audio/Video department manager Joey Schultz.

The results were breathtaking. Check out the videos and you’ll see why this show is being called the “Magic on Medary.”

HenkinSchultz took our idea and vision, and created a finale that will be remembered as a legendary moment in the history of the university, the Foundation and Alumni Association. The crowd was simply transfixed by the flawless production. It was stunning, magical.

The visual show featured images that told the story of SDSU’s history, and showed some of the important people who helped grow the university along the way. Three levels of different images would intermingle and quickly change, keeping the audience engaged and excited. Messages that had relevance to past SDSU Foundation efforts, such as ‘Bring the Sunset’ and ‘imagine’ were also mixed into the show.

We also used the talents of Jason Jellis and Eric Van Beek from the HS Sign Shop to create a Donor Wall honoring the many contributors from over the years that led to the making of the Alumni Green. The Donor Wall was a big hit amongst the contributors, with some so touched by the gesture that they immediately gave more money to the school on the spot. 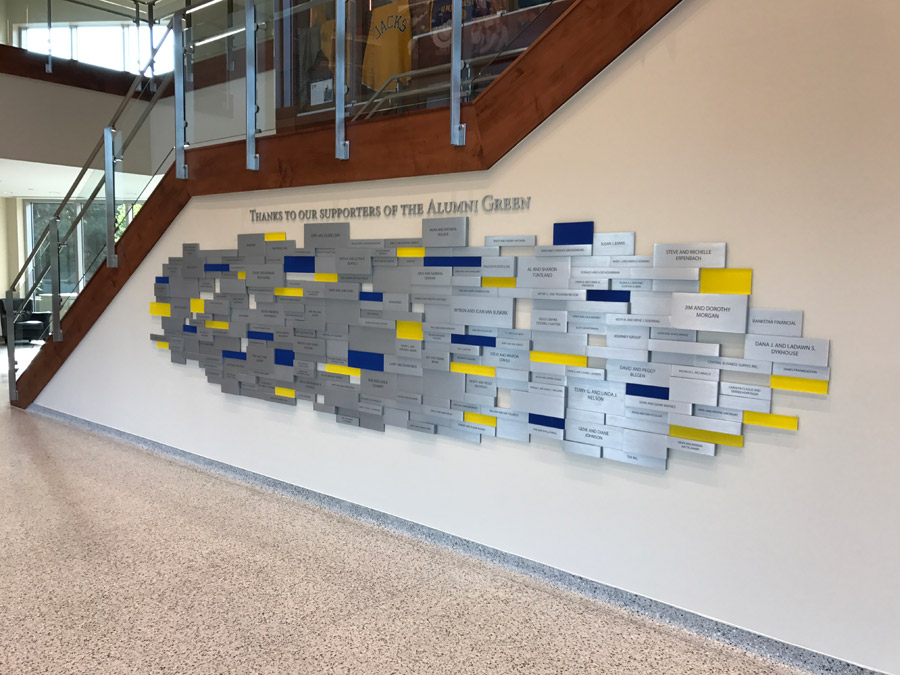 The Foundation has worked with HenkinSchultz for nearly a decade, and they have been absolutely critical in creating the most moving and memorable events we’ve ever done. After every event, we ask HenkinSchultz, ‘How are you going to top that?’ Each time, they do.

We were honored to participate in such a great event that honors those who’ve illuminated the lives of so many through the gift of education. We were ecstatic to be able to shine some of our light on these great efforts!