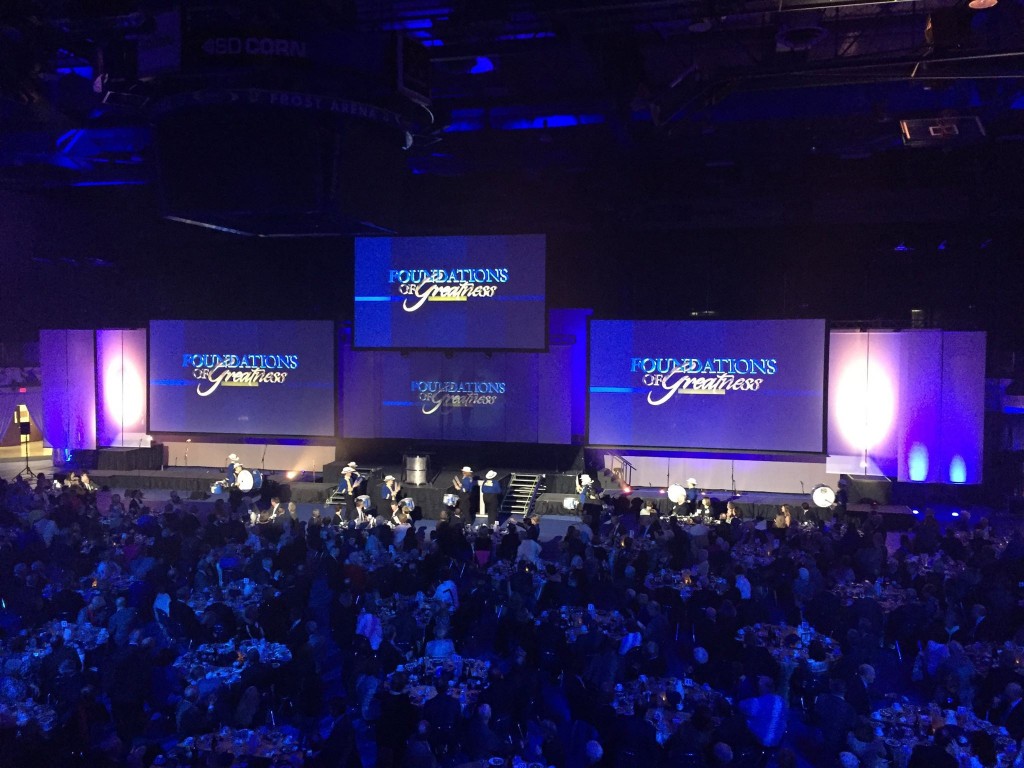 If you’ve been around the HenkinSchultz office while we’re planning an event, it’s likely you’ll hear Kirby Schultz remind you of the one thing that will make sure it stands above the rest – People will forget what you said. People will forget what you did. But people will never forget how you made them feel. This year, as in years past, our goals for the SDSU Foundation Donor Celebration were to ensure donors were honored, and to leave the nearly 1,000 people in attendance with an uplifted, proud feeling they would never forget. The evening kicked off with a boom – or rather lots of them in unison as the Pride of the Dakotas marching band drum line set the tone for an evening of gratitude and entertainment that included performances featuring 80 student singers, dancers and musicians. With lots of talent to work with both at HenkinSchultz and at the university, we planned, staged and produced an inspired celebration show that turned the Frost Arena into a Broadway-worthy spectacular. At show time, we were busy behind the scenes making sure that everyone kept the beat. When the applause ended, our team sighed a great sigh of satisfaction, smiled and packed up with the next show on their minds. Back in Sioux Falls one week later, we were off to the Sioux Falls Convention Center to set up the Sioux Falls Convention & Visitors Bureau Visitor Industry Luncheon with the same goal in mind – make it memorable. We shot dozens of interviews to create video that gets to the heart of what Sioux Falls is all about, staged an amazing production, and stood by directing digital traffic to make sure we exceeded expectations. In the end, it was lots of hard work, but ever-so rewarding. At HenkinSchultz, we understand what it takes to make people “feel” it – whatever that it may be for our partners and clients. That’s why we do major staged events better than anyone else around. But don’t take our word for it, ask people how they felt at the end of the SDSU Foundation Donor Celebration or the CVB Visitor Industry Luncheon, and you’ll know it’s true.